Read the original article on Medium

The potential of AR as a storytelling tool

I am Bram van de Ven, Official Snapchat Lens Creator from the Netherlands and founder of arfected. I started exploring the world of AR about a year ago and fell in love with everything about it. So much that I created my own start-up in building AR experiences. I recently created a the Snapchar Lens: Oldskool. It reached upwards of one million Snapchatters in less than two weeks. After that, its virality got me thinking: what is the potential of Snapchat Lenses and storytelling through augmented reality?

My “Oldskool” Lens was inspired by a popular analog camera effect, one which adds a red date stamp and light leaks to your photos and videos. (Yeah it’s not just you, my Instagram feed looks like it’s from 1998 too.) Inspired by the momentum of this effect on other platforms and the “nostalgia” it inspired, I decided to see if the effect would be compelling on Snapchat as an augmented reality Lens. Therefore, I crafted up some light leaks, a bright red date stamp, and added some interactivity.

After building the Lens and submitting it to Snap, I turned to a community-driven Lens Studio Reddit page to promote the creation. Along with the post, I shared example Snaps with light leaks and the red date stamp. When I returned to my Lens dashboard portal in Lens Studio a few days later, it was clear that this Lens was well on its way to overthrow all of my earlier Lenses!

Within just over two weeks, my “Oldskool” Lens had found an audience, inspiring Snapchatters around the world to create and publicly share Snaps. Snapchatters from Puerto Rico to Brazil to Austria, the U.S., France, the Netherlands, and more were adding nostalgia to their Snaps. After two weeks, the Lens was seen by over one million people on Snapchat!

What my experience tells us about the potential of AR

My generation — Gen Z — has an affinity for things that remind us of our youth. Therefore, this Lens tapped into this feeling, offering an effect that Snapchatters could physically explore and layer into their Snaps.

The experience of watching this Lens resonate with millions of people around the world has affirmed a previous hunch: Augmented Reality can be a simple, approachable storytelling tool. If we can use the technology to help us communicate mood and emotion, that could be incredibly powerful.

Got your 🧠 cracking with new insights, let us hear your thoughts 👀 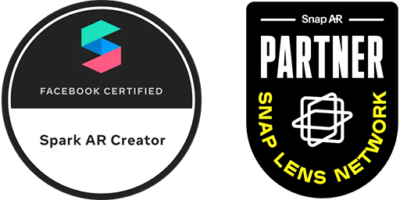 Stay up to date on the latest
and greatest in the world of AR!
Sign up